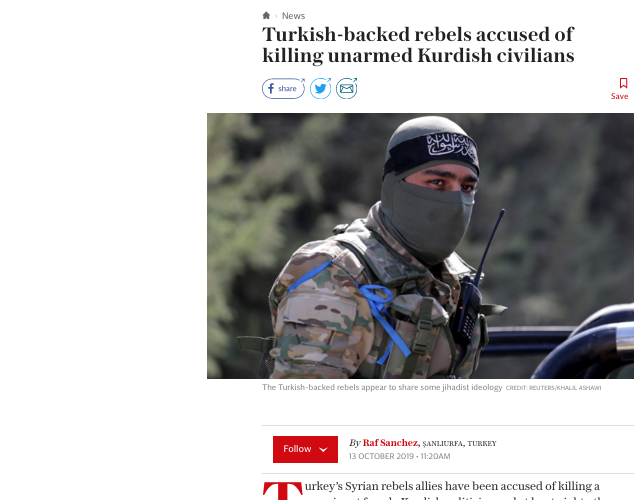 <<Turkey’s Syrian rebels allies have been accused of killing a prominent female Kurdish politician and at least eight other unarmed civilians as they advance into northeastern Syria, raising fears of further atrocities to come.

Kurdish forces also said 785 family members of Islamic State (Isil) fighters had escaped from a camp amid the chaos and warned the West that resurgent jihadists “will come knocking on your doors” if the Turkish offensive is not stopped.

Kurdish officials said rebel fighters intercepted a car carrying Hevrin Khalaf, a Kurdish political leader with Future Syria Party, and murdered her along with her driver and an aide.

“She was taken out of her car during a Turkish-backed attack and executed by Turkish-backed mercenary factions,” the Syrian Democratic Council said in a statement.

The Syrian rebels, known as the National Army, denied they were responsible for the killing and insisted their forces had not yet reached the area where Ms Khalaf was killed.

But video footage appears to show National Army fighters surrounding her black SUV, which is riddled with bullet holes. The Arabic-speaking fighters step over a male body on the ground but there is no sign of Ms Khalaf in the video.

The footage suggests the fighters attacked the car from the outside, rather than stopping it and dragging out its occupants.

The Syrian Observatory for Human Rights, a UK-based war monitor, said the rebels had killed at least eight other civilians as they advanced towards the strategic M4 motorway with the support of Turkish airpower.

Another video appears to show several Arabic-speaking fighters shooting an unarmed man on the side of a road. “God is great,” cries one man in the video, before urging a comrade to film him shooting the corpse with a sniper rifle.

The Syrian Democratic Forces (SDF), the Western-backed Kurdish fighters who led the fight against Isil, have repeatedly warned that Turkey’s rebel allies are “jihadists” whose share the ideology of al-Qaeda-linked groups in northwest Syria.

In social media posts, National Army fighters sometimes use the language of Islamist extremists, referring to themselves as “soldiers of the caliph” and promising to fight “Gods’ enemies, atheists, and those filthy Arab infidels beside them”.

The National Army committed a spree of murders and looting when they seized control of the border town of Afrin from Kurdish forces last year, according to human rights groups.

Turkey says the Syrian rebel forces will be at the forefront of its operations against Isil once the campaign the SDF is completed. But in social media videos, the fighters express more appetite for fighting the Kurds and the Assad regime than the jihadists.

Elizabeth Tsurkov, a fellow at the Foreign Policy Research Institute, said not all the Syrian rebels held extremist ideology and many were motivated by Turkish financial incentives.

“The main ideology they hold is sectarian: they anti-Kurdish and they are Arab chauvinists,” she said.

She added they were unlikely to be effective at combating Isil in northern Syria. “If we look at the way these factions rule northern Aleppo we can see they are an ineffective counter-terrorism force because of their poor discipline and organisation.

“They do what they are told to by Turkey but they do it very poorly.”

The SDF also said 785 people from the families of some Isil fighters had escaped from the Ain Issa camp in northern Syria as it was forced to divert troops to face the Turks.

The SDF said the women and children had managed to get free from the  camp, where thousands of Isil family members are being held, and warned the international community there would be more escapes if the Turkish-offensive was not stopped.

“We call on all of you to shoulder your responsibilities and to intervene quickly to prevent a catastrophe that will not only affect Syria, but will come knocking on your doors when things get out of hand,” Kurdish authorities said in a statement.

The Syrian Observatory said it was “anarchy” inside the camp. There have been uprisings by Isil prisoners and their families at a number of Kurdish facilities in recent days. >>

This website uses cookies to improve your experience while you navigate through the website. Out of these, the cookies that are categorized as necessary are stored on your browser as they are essential for the working of basic functionalities of the website. We also use third-party cookies that help us analyze and understand how you use this website. These cookies will be stored in your browser only with your consent. You also have the option to opt-out of these cookies. But opting out of some of these cookies may affect your browsing experience.
Necessary Sempre abilitato
Necessary cookies are absolutely essential for the website to function properly. These cookies ensure basic functionalities and security features of the website, anonymously.
Functional
Functional cookies help to perform certain functionalities like sharing the content of the website on social media platforms, collect feedbacks, and other third-party features.
Performance
Performance cookies are used to understand and analyze the key performance indexes of the website which helps in delivering a better user experience for the visitors.
Analytics
Analytical cookies are used to understand how visitors interact with the website. These cookies help provide information on metrics the number of visitors, bounce rate, traffic source, etc.
Advertisement
Advertisement cookies are used to provide visitors with relevant ads and marketing campaigns. These cookies track visitors across websites and collect information to provide customized ads.
Others
Other uncategorized cookies are those that are being analyzed and have not been classified into a category as yet.
ACCETTA E SALVA